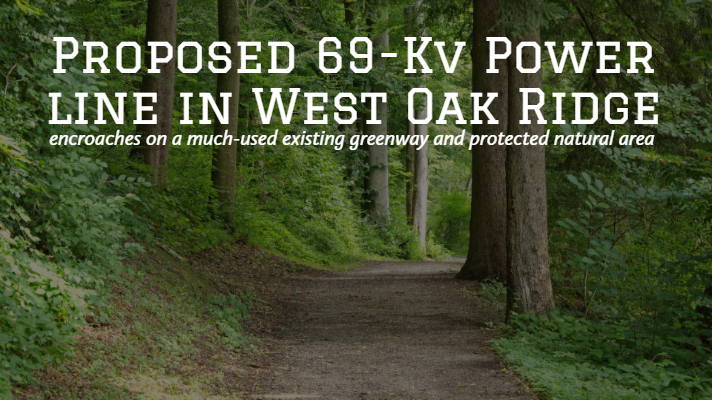 The city of Oak Ridge’s efforts to set a route for a 69-kV power line to Horizon Center, a largely unused industrial park in the west part of the city, continue.

While the need for additional electricity is not in dispute, the path it might take is the subject of controversy. The current proposed route encroaches on a much used existing greenway; is an additional injury to the Horizon Center natural area, which DOE committed to protect from development when the Horizon Center property was transferred for development; and reduces the ecological and recreational value of the adjacent Black Oak Ridge Conservation Easement (BORCE).

The natural area has already suffered incursions that were not properly evaluated (or even acknowledged), including about 2 acres cleared for a natural gas line, another clearing of about 2 acres at the west entrance to Horizon Center, and dumping of road construction spoil in the East Fork Poplar Creek floodplain and the natural area. These individual encroachments add up to significant cumulative impacts. DOE already approved an easement for part of the proposed 69-kV line that would adversely affect both the natural area and the Greenway, but that part of the line won’t be built unless approval is granted to extend it farther east. The city’s request for additional permissions must be rejected now to prevent serious negative impacts to the fragile natural area and the greenway.

Additional power can be supplied to Horizon Center without damaging the resources, but the cost would be higher because the power line would be somewhat longer.

Oak Ridge can figure this out! To protect the resources, communication has to go to the city (email CityCouncil@oakridgetn.gov and City Manager mwatson@oarkidgetn.gov) encouraging authorities to conduct an economic analysis of the value of the greenway and the natural area, to DOE (David.Adler@orem.doe.gov and johnshewairy@science.doe.gov) to honor its stewardship commitment to the natural area.

Proposed 69 KV Powerline in the news