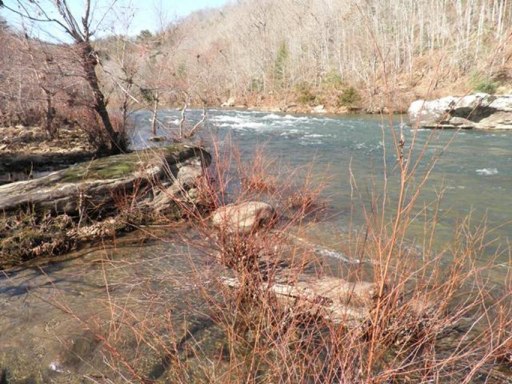 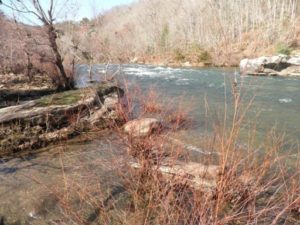 The dam proposal. The superb wild gorges of the Obed, Clear Creek and Daddys Creek that increasing numbers of people are now getting to know and love came very close to being condemned to disappear forever at the bottom of a deep reservoir. When TVA announced about 50 years ago that it was studying a proposal to dam the Obed, the threat seemed almost insurmountable. Local governments were pushing energetically for a reservoir, and they secured the support of Congressman Joe Evins, the powerful chairman of the House Appropriations Committee, who had a long, unbroken record of success for pork-barrel projects; and TVA was in the heyday of its dam-building era. Justification for the proposed Nemo Dam (which was to be located near Alley Ford) was flood control downstream, at Harriman; neither hydropower nor navigation was planned. .

Defeating the dam. In those days, the glories of the Obed gorges had been experienced by very, very few people, among them, Bill and Lee Russell, geneticists at the Oak Ridge National Lab. The small band they recruited to their fervent cause of saving the Obed (a group that soon became TCWP) went to work gathering a great deal of information in such areas as hydrology, economics, and past dam proposals. It became clear from this citizen effort that the flood danger to Harriman had been vastly exaggerated. TVA did a re-study, and the benefit/cost ratio for the Nemo Dam dropped to considerably below 1.0. But, despite these findings, local agitation for the dam continued strong, and TCWP realized it now had to enter the political arena, specifically via channels that could influence Congressman Evins. Fortunately, at about that time, his district came to include Oak Ridge and he was made aware that large numbers of his new constituents there were dedicated to keeping the Obed flowing free. His support for the project became muted, and, soon thereafter, TVA declared that the Nemo Dam was not economically justifiable, even when recreation was thrown into the calculation as an additional benefit. The proposal was dead for the foreseeable future.

Looking for legislative protection. But those who loved the Obed realized that just saving it from one threat was not enough – it needed positive protection for all times to come. The Russells. along with Bob Miller, a Nashville geologist and one of the co-founders of TSRA, found a legislator (Bill Pope) willing to sponsor a state scenic rivers act, and the three of them drafted the legislation for him. The Obed, with its major tributaries was, of course, primary among the rivers listed. TCWP’s attempts to obtain support from local politicians, however, resulted, instead, in stimulating political opposition, because hopes for the dam were still very much alive. One member of the power structure described the Obed gorge as “nothing but a dirty crack in the ground, full of rattle snakes and copperheads.” The Tennessee Scenic Rivers Act did indeed pass in 1968, but the Obed had been amended off it!

During the same year, the national Wild & Scenic Rivers Act was wending its way through the Congress, and the Obed supporters, quietly but effectively, set to work to get the Obed included in the category of rivers to be studied for possible inclusion. Congressman Bill Anderson was recruited as a prime advocate in that cause, but it was also necessary to obtain an endorsement from the State of Tennessee. State officials were pushing the Buffalo River for inclusion in the national legislation, and they worried that any support for the Obed would dilute the cause for the Buffalo. Bill Russell made a couple of persuasive visits to Nashville and finally managed to obtain state endorsement. Thus the Obed, as well as the Buffalo, ended up in the study category of the federal Act, which passed in the fall of 1968.

Getting the rivers studied. There followed an intensive period of agitation to move the Obed up in the priority order of study starts for the 27 listed rivers. The study did, in fact, get under way fairly expeditiously, after which Obed advocates assisted the Bureau of Outdoor Recreation by contributing data, photographs, and guide services. They generated numerous testimonies at public meetings and extensive comments on drafts. The report that finally emerged concluded that about 100 miles of the Obed and its major tributaries were highly qualified for designation as national wild and scenic rivers.

Getting a bill passed. But the study by itself was relatively useless unless translated into legislation. A candidate for the congressional district was persuaded by TCWP to include this objective in his platform. Sadly, during the weeks between his election and the start of the session, he was killed in a plane crash. His widow, Marilyn Lloyd, got to fill his House seat, and she fortunately pledged to honor her late husband’s promise.
In the meantime, another complication had arisen. An Oak Ridge couple who owned a vacation home on Daddy’s Creek initiated a vigorous campaign against Wild & Scenic River designation, convincing influential members of the Cumberland County Court (who also owned weekend places nearby) that the area would become overrun by hippies. Powerful stripmine interests joined the anti-designation campaign. It became clear that inclusion of Cumberland County portions (the upstream parts of the watershed) would kill any proposed legislation. Obed advocates had to chose between two courses of action: half a loaf now, or perhaps the whole loaf at some unknown future date. This caused some very regrettable, but fortunately only temporary, rifts within the conservation community, but the half-loaf proponents pointed out that it had been almost a miracle to get even that far, and that the opportunity for any legislation might never return. If it did, upstream portions could hopefully be added in the future.
As it turned out, even Morgan County almost slipped away, and it was only due to the tireless and intelligent efforts of Don Todd, a Wartburg teacher, that Congresswoman Lloyd became convinced of the support of that portion of her district. The bill (which had gone through some amendment hurdles, such as change in designation of managing agency, and the role of the Catoosa Wildlife Management Area) finally became law on October 12, 1976, at the very end of the 94th Congress. The Obed became the only National Wild & Scenic River in Tennessee, one of only three in the Southeast, the only one under National Park Service management, and (often forgotten) the only one that has mostly (98%) “wild” designation.

The bill is not the end. A very major step indeed, but, again, a step that had to be built on to achieve its real meaning. Land had to be acquired and appropriate management instituted; and, again, TCWP devoted considerable energy toward these and other goals. In 1999, the Obed was, after a long struggle, designated an Outstanding National Resource Water, the highest protective water-quality designation. Dam proposals for upstream tributaries were opposed because they would have detrimental effects on water quantity in the main rivers.

Much has been achieved, but much work remains to be done. Here we are, more than one-third of a century after passage of the authorizing legislation, and less than 80% of the authorized acreage has been acquired; additionally, many of the existing acquisitions are for easements only, which provide incomplete protection. No protection of any kind exits for the scattered, still privately-owned tracts within the authorized purchase boundary. Residential developments, which are mushrooming all over the Cumberland Plateau could destroy the wild character of the entire gorge. Oil and Gas exploration and extraction are a rapidly growing threat. TCWP has been working to leverage federal acquisition funds and to find private conservation buyers who would hold such parcels until they could go into public ownership. TCWP itself, has been among such buyers.
Among additional TCWP interests are Obed operating funds which must be adequate for protecting an park with such a long boundary. TCWP provided considerable input into NPS’s excellent General Management Plan (GMP) that was adopted in 1995 and into the Climbing Plan. Other detailed plans within the framework of the GMP remain to be generated — plans that will help protect this unique and fragile resource against overuse and resource damage. Finally, TCWP attempts to keep a watchful eye on the larger Obed watershed, where threats to water quality have arisen from stripmining, oil & gas operations, disposal of coal ash, concentrated animal feedlots, and polluting industries.
We hope that those who are enjoying these magnificent gorges in the new millennium will join with those who saved this national treasure during the past century in working for these goals.