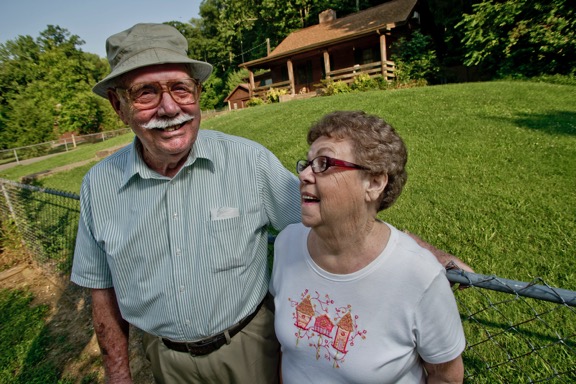 William E. Armes (“Foye”), 93, passed on Sunday, November 1, 2020 at his home on Flat Fork Road near Frozen Head State Park and Natural Area while surrounded by family and friends.  He is survived by his wife of 74 years, Juanita Shannon Armes, his daughter Janet Goddard and husband Mike and a host of grand- and great-grandchildren, nieces and nephews.

Foye was born and spent his early years in the New River area of Anderson County before his family moved to the Flat Fork Valley of Morgan County in 1932.  Except for the years he spent serving his country in the U.S. Army as a Field Wire Chief (1946-1947), he lived in the Flat Fork Valley the rest of his life.

Foye began protecting and caring for the area now known as Frozen Head State Park and Natural Area long before he became employed as the Forester of the Morgan State Forest in the late 1950’s.  This was “family land” to him as, in 1822, his ancestor Bletcher Armes settled on a federal land grant that encompassed property that is now the Park and Natural Area.  Many members of Foye’s family lived within what is now the Park boundary, and the family name is associated with a number of Park sites such as Armes Gap.  Foye vividly described some of the early history of this land and people in his memoir Tid Bits and True Tales of the Frozen Head Mountains, published in 2018 (copies available at the Frozen Head SP gift shop and on Amazon).

When Foye’s father Kirlie Armes became (the first) Forester of the Morgan State Forest (1942-late 1950’s), Foye and his parents, brothers and sister moved to the cabin that had served as a residence for the Civilian Conservation Corps (CCC) Camp Superintendent during the 1930’s.  This cabin is now a Park Ranger’s residence and is located adjacent to the Park Visitor’s Center.   Foye grew up in this cabin and later succeeded his father as (the second) Forester of the Morgan State Forest.

As a young man, both before and after his term of military service in WWII, Foye cruised timber in the Forest with his father and served as the Morgan State Forest Fire Crew Chief.   While Fire Crew Chief, and later as Forester of the Morgan State Forest, Foye fought the infamous and widespread fires of 1952 and 1961, when he was on the fire line for weeks at a time working to contain the fire, transport and manage fire crews and their equipment, and save as many of the ancient landmark trees as he could.

When Morgan State Forest became Frozen Head State Park in 1971, Foye continued protecting the Park area as Caretaker until his retirement in the mid-1970s, when a State Park Manager (Duane Wyrick) was named.  After his retirement, Foye’s extensive knowledge and familiarity with the Park and its landscape features made him an invaluable resource in guiding and advising local community and Park search and rescue teams; on several occasions, his knowledge of the back country was critical in determining the location of missing persons.  He also advised successive Park staff regarding the rich inventory of wildflower species found at the Park, and offered his extensive slide collection for Park archival use.  His long-time familiarity with the CCC Camp era and the Stonecipher-Kelly House and grounds helped identify historical locations and uses of various CCC structures as well as dating features of the Stonecipher-Kelly site, such as the Stonecipher-Kelly magnolia.   Recent Park signage development reflects his valuable input.

One of Foye’s many courageous acts in support of the Park was his significant work to preserve, intact, both the Flat Fork Watershed and the Frozen Head State Park Viewshed.  The slopes and mountain ridge across Flat Fork Creek as seen from the front porch of the Park Visitor Center were once owned by a single, privately held, land company that fully intended to perform a large-scale clearcut on Bird Mountain to be followed by mountaintop removal and contour mining of coal. The end result would have been similar to a moonscape.  Initial mine permits had been applied for and approved when Foye, along with Don Todd, Flat Fork Valley resident Mary Ann McPeters, and organizational allies Bob Lantz (representing the Frozen Head State Park Association),  Bill Russell (representing TCWP) and Will Skelton (representing the Tennessee Chapter of the Sierra Club) signed the locally famous Petition to the Department of Interior Office of Surface Mining Reclamation and  Enforcement (OSMRE) to designate the Flat Fork Creek Watershed and portions of the Mud Creek Watershed as “Lands Unsuitable for Mining” due to its higher and better use as an intact watershed.   The date was September 25, 1985.

At that time, to stand up for the land here in East Tennessee was a dangerous thing to do. Such an act invited open hostility, intimidation, property damage, and bodily harm.  Foye became a target when he signed that Petition in September of 1985, and was shortly paid a personal visit by the owner of the mining company that intended to stripmine Bird Mountain.  The mine company owner attempted to intimidate and harass Foye into withdrawing his name from the Petition, but Foye stood firm and refused.  Foye continued to stand fast throughout the several years of hearings and proceedings that followed, and provided encouragement to the growing number of allies who came to support the Petition.  Eventually, in March of 1990, the OSMRE agreed with the Petitioners and declared the area as “Lands Unsuitable for Mining.”   Thus, when the Bredesen Administration found the state funds to purchase the Petition Area property in 2007 as part of the “Connecting the Cumberlands” initiative, there was an intact and well-forested watershed to purchase rather than a desolated landscape.   The Petition Area now also hosts the Cumberland Trail and is a destination for an increasing population of hiking enthusiasts.

So, thank you, Foye, for speaking truth to power and keeping the long view. We are all the richer for it. [In honor of Foye and his many years of conserving and protecting the Park, the Friends of Frozen Head State Park (964 Flat Fork Road, Wartburg, TN   37887-3208) organization has established the Foye Armes Memorial Fund to support enhancement and restoration of native plant communities within the Frozen Head State Park and Natural Area].