Plea to TCWP Members Regarding the Motorsports Park Proposal 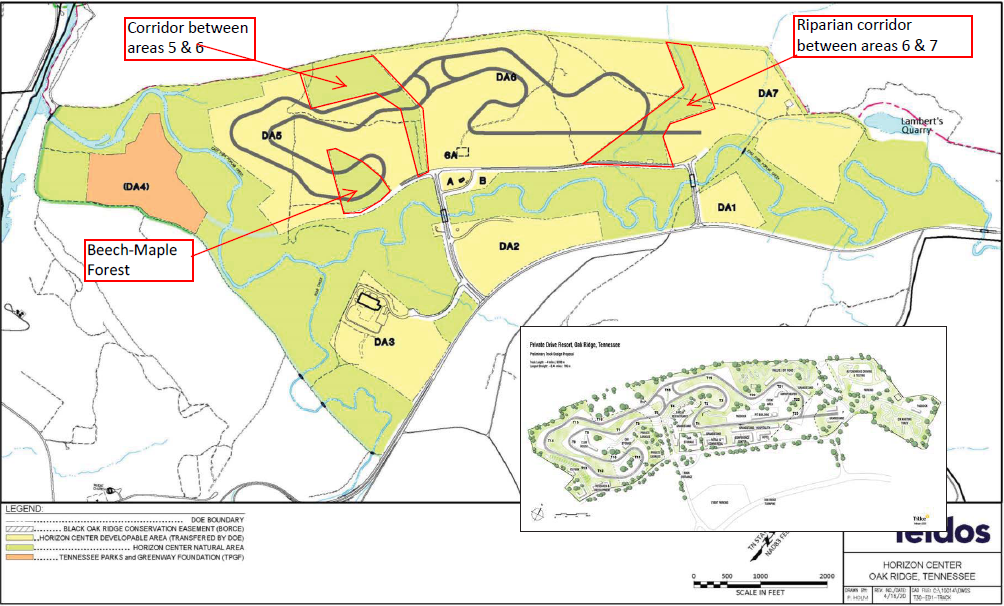 The Department of Energy has released an Addendum to the Environmental Assessment (EA) at the Horizon Center (HC). The addendum details a proposal favored by the Oak Ridge Industrial Development Board (IDB) that would remove or modify protection for natural area parcels that lie between the three tracts of land previously approved for development. The IDB has voted in favor of making nearly all the available HC acreage for purchase and development for a motorsports park and associated amenities. The figure below is from the EA addendum. Additionally, the IDB-accepted proposal broadens the future use of the space beyond that of industrial or office space and includes the possibilities of hotels, a recreational vehicle (RV) park, a vehicle test facility, residential development, and an amphitheater. TCWP has concerns about the loss of these natural areas, the proposed use of the land, and the impact on the surrounding natural areas and community. The proposal from DOE represents a major change since these natural areas have consistently been preserved due to their high environmental value. It represents a major departure from the only previously-proposed use as an industrial park, which would provide good jobs and limited impacts on the natural areas. In addition, the Black Oak Ridge Conservation Easement and nearby residential areas could be dramatically impacted by the motorsports park, with intrusion of traffic and noise being heard miles away.

In the Environmental Assessment Addendum, the stated purpose of the proposed action is to create a single large tract for development and relax environmental protections. This is not an appropriate purpose for a federal action. The EAA contains numerous non-binding mitigative recommendations and strategies that are unenforceable on a third-party owner and should not be considered in the analysis.

What can you do?