Here is something fun to do during April 24-27. Participate in the iNaturalist City Challenge 2020. The City Nature Challenge is an international competition between cities to see who can observe the most wildlife in a four-day period. It’s a bioblitz that happens all over the world! Cities compete for the most observations, the most species documented and most people engaged.

There is a friendly competition among the four cities in Tennessee that have registered for the competition. See their project descriptions at:

To participate download the iNaturalist mobile app (free), create an account, and start recording your observations and contributing to science. iNaturalist allows you to keep track of your nature observations, crowdsource identifications, learn about nature, create useful data for science, and become a citizen scientist.

iNaturalist is a joint initiative of the California Academy of Sciences and the National Geographic Society. Every observation contributes to biodiversity science, from the rarest butterfly to the most common backyard weed. Findings are shared with scientific data repositories like the Global Biodiversity Information Facility to help scientists find and use the data. 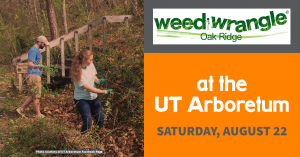 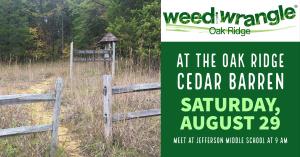 This will be the second of our three annual workdays at the Oak Ridge Cedar Barren. Located next to Jefferson Middle School in Oak Ridge, the barren is a joint project of the City of[...]
View Calendar
Add