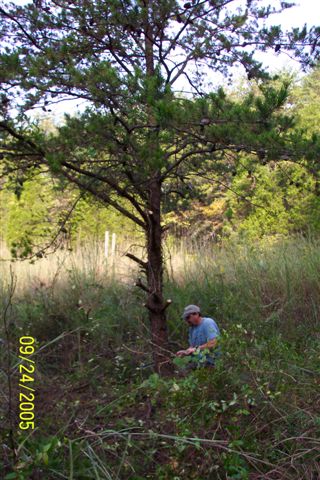 Worthington Cemetery lies within a cedar-barrens area abutting the Clinch River (Melton Hill Reservoir) on the west side of the river bend near the old Elza Gate. The tract is on TVA land which, prior to 1992, had been designated (but not developed) for “industrial” use. It had received considerable abuse through extensive dumping, and was rutted by off-road vehicle use. The area encompassing the cemetery, however, contains at least 14 plant species of interest, and is home to several bird species (including red-shouldered hawk, green-backed heron, and hairy woodpecker), as well as frogs and lizards.

In the fall of 1992, TCWP wrote to TVA recommending that the 29-acre tract be designated a TVA Natural Area. TCWP pointed out that, when cleaned up, the area would be suitable for short walks, wildlife study, and volunteer projects. The organization offered to make the area into an urban wildlife sanctuary, and to develop an environmental-education-study program within it that would be available to students of Oak Ridge and Anderson County schools.

At the request of the Oak Ridge Planning Commission the land was rezoned from IND-1 (Industrial District) to G (Greenbelt District). In January 1993, the City wrote to TVA encouraging the agency to reclassify the parcel to a TVA Natural Area. Following a June 1993 meeting between TVA and City staff, TVA agreed to install a tamper-resistant gate and give the key to Worthington heirs. Signs prohibiting certain activities would be erected, and it was determined that local ordinances were fully applicable and that City police could patrol the area. Later in 1993, TVA and the City designated the tract as an Ecological Study Area.

In November 1993, 50-60 energetic people collected 60 discarded tires and about 200 bags of trash from the area. In addition to TCWP members, many of the volunteers were students from the High School Advanced Biology Class taught by TCWP Director Fred Holtzclaw and from two JJHS biology classes taught by Ms. Pat DeRoos. Councilman Jerry Kuhaida and several members of the Worthington family (much touched by the clean-up effort, especially by the participation of so many young people) also participated.

In subsequent years, TCWP has sponsored a number of nature study activities, maintenance, and trash pick-up. Boy and girl scouts constructed short trails and built bird-nesting boxes. Students from Oak Ridge schools and residents of The Rivers subdivision frequently visited the area. Starting in 1999, TCWP has annually participated in Public Lands Day by making improvements at the Worthington Cemetery Ecological Study Area through the elimination of exotic species and improvements in trails. Descendants of the Worthington family, who now live elsewhere, have expressed their appreciation.